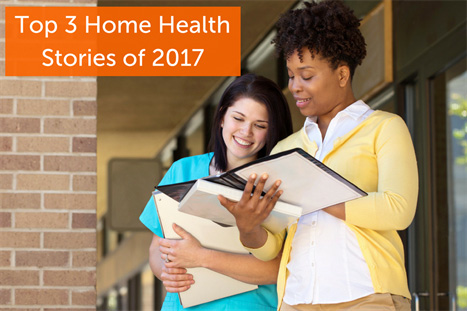 Now that 2017 has come and gone, it’s a good time to look back at some of the biggest stories in home healthcare from the last 12 months, and see where we are now. Last year was a transformational year in the industry, particularly in terms of the rules and policies that agencies must follow, and Complia Health covered these changes in detail here on our blog. So, let’s check in on these stories, and see how they are playing out in 2018.

In August 2016, CMS’ Pre-Claim Review Demonstration was rolled out in Illinois — and by all accounts, the process did not go well. Illinois was the first state of five (Illinois, Florida, Massachusetts, Texas, and Michigan) in the demonstration, which was designed to catch inappropriate claims and billing errors before claims reaches CMS, thereby reducing fraud and waste. However, in the early days of the demonstration, providers complained of technical issues with the pre-claim submission system, excessive paperwork, and inappropriate denials. The problems were so rampant that CMS initially delayed the start of the process in Florida, which was set to begin on October 1, 2016, by 30 days, while continuing the demonstration with changes in Illinois.

However, on March 31, 2017, one day before the rescheduled demonstration was set to begin in Florida, the entire project was put on pause. Initially, the pause was to last for 30 days while CMS reviewed the structure of the program, but the pause/delay is still in effect. CMS continues to note that the Pre-Claim Demonstration has not been shelved entirely, and that it will return, albeit with some significant changes to combat the issues that plagued the initial launch. Among the predicted changes include possible voluntary participation in exchange for exemption from future audits and limiting pre-claims to specific diagnosis codes.

The bottom line? For now, agencies do not need to submit claims for review prior to submitting the final versions to CMS. However, that could change in the coming months, so stay tuned.

In April, Complia Health reported on the new Conditions of Participation (CoPs) for home health agencies that took effect on January 13, 2018. These new rules were initially set to go into effect on July 13, 2017, but were pushed back to give agencies more time to comply with the new regulations. Among the changes to the CoPs that agencies must contend with include expanded requirements regarding patient rights, expanded patient assessments, new requirements regarding written information about the home health plan and providers, requirements for improved communication, improved infection control efforts, improved efforts to ensure the quality of care, changes to agency structures, and expanded personnel requirements for administrators and managers.

The extension of the effective date for the CoPs stemmed in large part for the need for interpretive guidance on the new rules for agencies. However, the final rules were approved and published in the Federal Register on January 9, 2018, with the effective date of January 13, 2018 still in place. Agencies have until July 13, 2018 to implement one QAPI standard: Performance Improvement Projects. In addition, CMS also announced that during the first year of the new CoPs (until January 13, 2019), agencies would not be subject to Civil Monetary Penalties for failing to comply with the new rules, provided that they were taking actions to be compliant. The only exception would be if the noncompliance is deemed to be creating an “Immediate Jeopardy” situation.

The bottom line? The new rules are now in place, and if your agency is not yet in compliance with the new standards, you need to be taking immediate steps to rectify the issues. Keep in mind that tools like Complia Health’s family of home health software products can help you meet many of the requirements.

In 2016, the Obama Administration changed the rules regarding overtime pay, requiring businesses to pay automatic overtime for employees earning less than $913 per week, or $47, 476 annually. The rule was initially set to go into effect on December 1, 2016, but legal challenges delayed the implementation of the rule. In September 2017, the rule was finally killed by a federal judge in Texas, who cited the detrimental impact on small businesses. Within home health alone, more than a quarter of agencies had already stopped offering live-in or overnight care as a result of the rule, and many agencies cut provider hours or changed client schedules to avoid paying overtime.

The bottom line? The axing of the overtime rule came as a relief to many agencies already operating on slim profit margins, and for now, agencies can continue to follow existing laws regarding overtime pay, including the 2004 earnings thresholds for determining automatic overtime pay eligibility. However, expect to hear more about this in the coming year, as the current Department of Labor secretary agrees that the existing thresholds are too low. It’s likely that a new rule, with a threshold in the $30,000 per year range, is coming soon.
These are just some of the stories that Complia Health covered last year. Keep following this space for up-to-date coverage of the issues affecting your agencies. And while you are here, don’t forget to check out our other resources for home healthcare agency management.